Life on the seas has always been an adventure of hardship and endurance. While fighting the cold Alaskan seas is a journey worthy only of the toughest men and women, such brutality brought knitting innovation that would help to alleviate some of nature’s fieriest betrayals. One such approach to dealing with the harsh life on a vessel was the nipper.

Fishermen working trawl lines in the 19th century often suffered cuts and rope burns on their hands. They typically wore mittens or gloves to protect themselves when hauling the long lines aboard and removing the fish. These sturdy but soft rings, called nippers, are knitted of woolen yarn and stuffed with more wool. They would have fit around a fisherman’s palms, protecting his hands while his fingers remained free for tasks requiring dexterity. 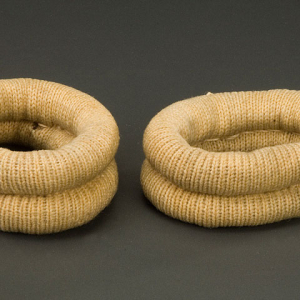 These nippers were probably made in Gloucester, Massachusetts, for use by local fishermen working on offshore schooners. The shallow, fertile banks stretching from Georges Bank east of Nantucket to the Grand Bank off Newfoundland, Canada, were prime fishing areas for Gloucestermen. Cod, haddock, and halibut were the principal species caught by fishermen working aboard schooners in these waters in the late 19th century.

Nippers themselves were likely named after a small rocky inlet in Newfoundland. Nipper’s Harbour is a small community of around 85 people that making a living on the high seas. Nipper’s Harbour was once known as “the Capital of Green Bay” and was a center for trade in the area, with fishermen from smaller communities up and down the coast delivering their fish to the merchants there for export.

With winter now firmly in our grasp, this innovation from the past is needed more than ever. Next time you’re tucking into your salmon or halibut, think of how your favourite hobby shaped how it got to your plate.