The history of crochet is complex and the story only further entangles in North Africa. Perhaps Tunisian crochet is a misnomer as the origins of Tunisian crochet hasn’t been determined; in some parts of the world it is known as Afghan crochet. Its fluctuating history and the limited archaeological discoveries have left its origins unknown.

Tunisian crochet uses an elongated hook often with a stopper on the handle end. The work is begun with the traditional starting chain, a series of slip stitches. Once the chain is completed, the first row is worked by inserting the hook back into the previous link of the chain, and a loop from the free end of the yarn is grabbed with the hook and pulled back through the link. Unlike traditional crochet, Tunisian crochet uses two use two hooks, so if often seen as halfway between crochet and knitting. 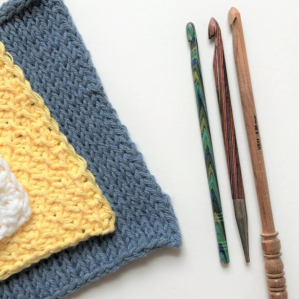 One credible theory suggests shepherds and sailors developed the technique as a simple way to create warm clothing. This is likely to have evolved from an ancient hook technique that was common around Africa and Central Asia, which would include the regions that are now Tunisia and Afghanistan.

Despite this, no crocheted fabrics have been found in Central Asia, the Middle East or North Africa that date before the 1920s; there are older examples in Europe. How the technique became associated with Tunisia is, therefore, unknown. A likely reason could have been an adaption from the French term tricot crochet, which appropriately suggest a mixture of knitting and crochet. 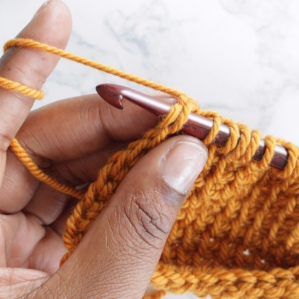 Nineteenth-century publishers latched onto the popularity of yarn crafts and began producing the first widely distributed patterns and craft manuals. It is from these that we have our first official references to Tunisian crochet. The name for the technique must originate from before this time period, but without clear evidence, it’s just going to have to remain one of those peculiarities of ancient textiles.