Mehrgarh is a hot spot for discovering the history of textiles in the Indian subcontinent. The findings push back the origin of major crops, suggesting that while some agricultural practices may have spread east to the Indus valley, others, like rice, cotton and crops that could rotate with other crops may have spread westwards from the Indus region.

Textiles are rarely preserved and Indus figurines are usually unclothed, so there is not much evidence of Indus Civilisation clothing. Small fragments of cloth preserved in the corrosion products of metal objects show that they wove a range of grades of cotton cloth. Flax was grown and may have been used for fibres. 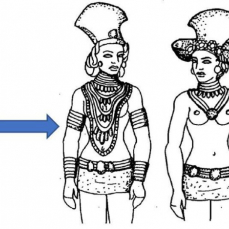 Clothing of women in the Indus Valley Civilisation

It is not known whether the Indus Valley Civilisation raised woolly sheep, but their trade with Mesopotamia probably brought them abundant supplies of Mesopotamian woolen textiles. The Indus people probably continued the earlier tradition of making clothing from leather. Dyeing facilities indicate that cotton cloth was probably dyed in a range of colours, although there is only one surviving fragment of coloured cloth, dyed red with madder; it is likely that indigo and turmeric were also used as dyes.

While there are limited depictions of clothing from the Indus Valley Civilisation, there is evidence that shows that men wore a cloth around the waist, resembling a modern dhoti, often passed between the legs and tucked up behind. The so-called “Priest-king” and other stone figures also wore a long robe over the left shoulder, leaving bare the right shoulder and chest. Some male figurines are also shown wearing a turban.

Clothing of men from the Indus Valley Civilisation

Woman’s clothing seems to have been a knee-length skirt. Figurines and occasional remains in graves show that the ancient people of the Indus Valley wore jewellery: hair fillets, bead necklaces and bangles for men; bangles, earrings, rings, anklets, belts made of strings of beads, pendants, chokers and numerous necklaces for women, as well as elaborate hairstyles and headdresses.