Hiyahiya S History Of Knitting Byzantine Silk And Its Demise

The Byzantine Empire was the eastern remnants of the Rome Empire, which finally met its demise at the fall of Constantinople in 1204 at the behest of a rampaging Ottoman Empire.

Much like the Romans, the Byzantines had a talent for art and a cultural influence that spread beyond their borders. Byzantine silk was particularly sought for, and even encouraged the smuggling of silkworms from China across the Empire, later dominating silk production across Europe until the Fourth Crusade disintegrated Byzantium. 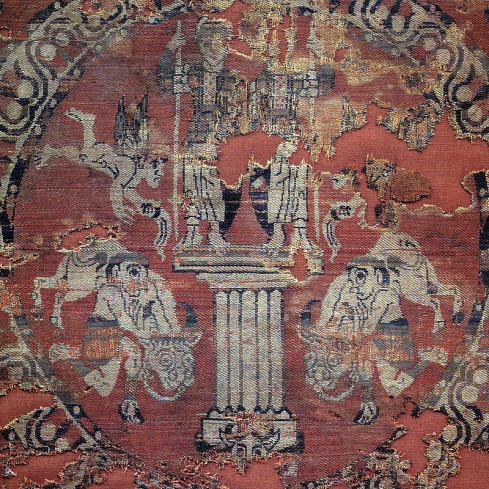 An example of silk from Byzantium.

The silk road that linked China to Europe since the Roman Empire was further enhanced with the alliance between the Byzantines and the Sassanid Empire. This allowed merchants to travel through Persia along the silk road, allowing for easier movement of silk.

Byzantine silk during the 6th century developed exponentially, with an array of colourful patterns and intricate designs using gold thread. Often, plants such as lotus leaves and flowers were used in the designs, as well as mythology such as griffins. Polychrome compound twills became the standard weave for Byzantine silk during the 600s, before monochrome lampas weaves became fashionable during the early 1000s. 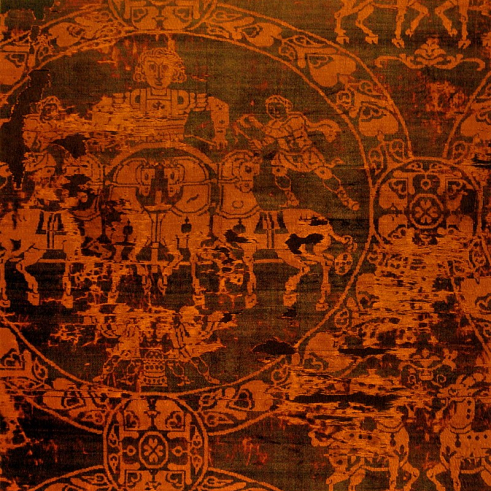 The shroud of Charlemagne, an example of polychrome Byzantine silk.

Surviving textiles document a rich exchange of techniques and iconographic themes between Constantinople and the newly-Islamic textile centres of the Mediterranean and Central Asia during the Muslim conquests of the 7th century. Many motifs echo Sassanian designs including the tree of life, winged horses, lions, and imaginary beasts, and there are numbers of surviving pieces where specialists cannot agree between a Byzantine or Islamic origin, showing the deep interconnection between Islam and Byzantine textiles from that period.

The political influence of Byzantine silk had become profound between the 4th and 12th centuries, Diplomatic gifts of silk had secured alliances with the Franks and formed naval and military partnerships with the merchant republics of Genoa and Venice. The value of Byzantine silk was increased further by its use as court attire and religious vestments. 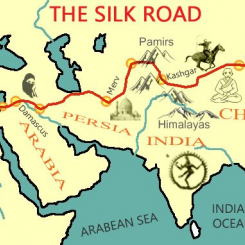 Map of the silk road.

It wasn’t until 1147 that Byzantium’s grip on the silk trade began to wane. During the Second Crusade, Roger II of Sicily attacked Corinth and Thebes, two important silk producing cities of the Byzantines, capturing the weavers and equipment to begin their own silk production in Palermo and Calabria. After the Fourth Crusade in 1204, it was all but lost.