The most popular legend about why stockings are hung at Christmas beings in quite solemn circumstances.  A recently widowed man and father of three girls was having a tough time making ends meet. Even though his daughters were beautiful, he worried that their impoverished status would make it impossible for them to marry. 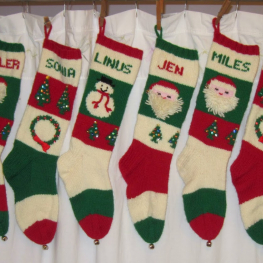 St. Nicholas was wandering through the town where the man lived and heard villagers discussing that family’s plight. He wanted to help but knew the man would refuse any kind of charity directly. Instead, one night, he slid down the chimney of the family’s house and filled the girls’ recently laundered stockings, which happened to be drying by the fire, with gold coins. And then he disappeared.

The girls awoke in the morning, overjoyed upon discovering the bounty. Because of St. Nick’s generosity, the daughters were now eligible to wed and their father could rest easy that they wouldn’t fall into lonely despair. While obviously far-fetched, this tale of unknown origin and date is most widely referenced when it comes to the history of the Christmas stocking,

Nowadays, the stocking is a Christmas decoration with potentially delightful surprises inside. While they’ve changed colour, size, and shape throughout the decades, the same principle has held true. Whether you’re knitting a stocking to hold your children’s gifts or you’re crocheting some adorable Christmas decorations, the stocking has come along way since its beginnings. With a mystical back story of kindness and generosity, The Christmas stocking is the perfect project to try out your new HiyaHiya needles this Christmas.