The cultural development between the Old World and the New World diverged in entirely unique ways. Within the Norte Chico culture of pre-Columbian America, there is no evidence of pottery, but structures of ceremonial pyramids existed for theocratic worship; a reversal of technological advancement compared to the Old World. The lack of pottery also preludes an absence of artistic expression, with the archaeological remains showing plain walls, with the likelihood that much of the art was expressed through textiles and music.

Cotton was a major influence on the colonisation era, driving the triangular trade of the period. Before the Spanish arrived in what is now Peru, the use of cotton for textiles and clothing was already flourishing. The Norte Chico civilisation didn’t only differentiate from the Old World, but much of the New World too. Many American civilisations were built on crops such as corn and maize, but the Norte Chico people lived on the sea and developed a taste for anchovies. Cotton was initially used to make fish nets and its use diverged from there. 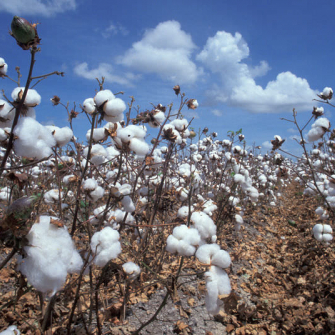 This suggests that agriculture wasn’t used as part of their diet but as a way of developing material for tools. There’s very little evidence of maize being grown by the Norte Chico civilization, with perhaps the vast majority of the agriculture dedicated towards cotton. This inclination for cotton had a cultural and political significance, control of the cotton meant control of the population.

Cotton wasn’t just used to make fishing nets, but also clothes and bags. It’s also likely that cotton was used to make decorations and other pieces of artwork that have long since decayed in time, leaving no trace behind. This leaves the people in the city of Huaricanga in ancient Norte Chico as the first documented people to wear clothes made from cotton. 4000 years later, this plant-based material would come to dominate the fashion industry.