The Mayflower set sail for North America in 1620, with many pilgrims anticipating a new life on a new continent. The ship had limited capacity, and even thought the first knitting machine was invented in 1589. it was unlikely the Mayflower would have burdened itself with new machinery, resulting in the pilgrims knitting the old-fashioned way – with needles.

The first record of a knitting machine in America was in 1771, over 150 years later. In an ad in the Virginia Gazette, it was stated that a “newly invented instrument for knitted, knotted, double looped work, to make Stockings, Breeches Pieces, or Silk Gloves, Cotton or Worsted” was now available. This left colonists knitting from home to produce their garments. 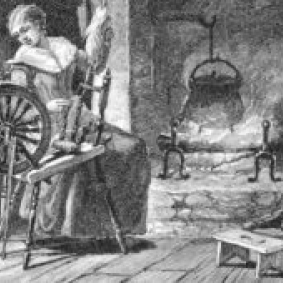 As the colonies were established and trade routes became more dependable, colonists were able to purchase knit goods and other items that were shipped to the colonies from England. Eventually, this would lead to the Wool Act of 1699, which forbade colonists from selling wool or wool cloth outside of the colony where it was produced, and also restricted the importing of wool produced within the British Empire. This restricted the market for their wool to only British citizens, reducing the wealth of the colonists.

The Daughters of Liberty was soon formed, vowing to forgo all British goods and instead to spin, weave and knit all of their families clothing and wear nothing but what they made at home. Spinning Bees became a political affair, becoming more than just a social gathering where women could gossip and knit. Churches began hosting spinning bees and preachers began preaching while the women spun and knit. 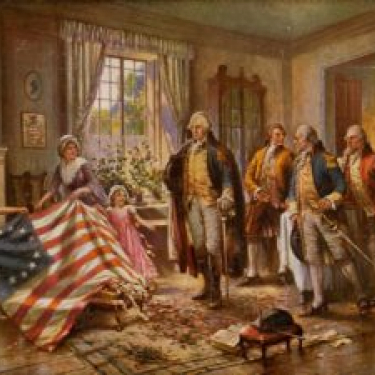 Women were now in an unusual situation. They were not allowed to vote and it was considered inappropriate for women to be involved in politics, but in their role of maintaining their homes and purchasing or producing food and clothing for their families, they had the ultimate say in whether their family would purchase British goods in loyalty to England or produce homespun clothing as a show of independence.