This Sunday is Armistice Day, a day of reflection and remembering those that sacrificed their lives in conflicts across the World. Surprisingly, WW1 was a revolution for knitting, at least when it came to espionage, allowing information to be secretly relayed to the right people.

During wartime, where there were knitters, there were often spies. The perfect cover, watching between the rustle of two knitting needles. When knitters used knitting to encode messages, the message was a form of steganography, a method of creating a physical message. 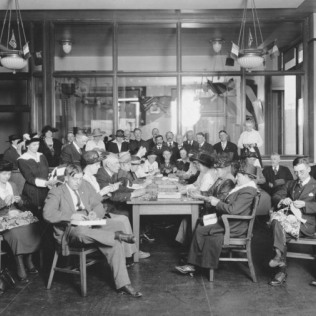 Every knitted garment is made of different combinations of just two stitches: a knit stitch, which is smooth and looks like a “v”, and a purl stitch, which looks like a horizontal line or a little bump. By making a specific combination of knits and purls in a predetermined pattern, spies could pass on a custom piece of fabric and read the secret message, buried in the innocence  of a knitted garment.

The threat of knitting espionage was so severe during WW1, the UK banned knitting patterns. Due to the fear of hidden messages, British Secret Intelligence agents hired spies in occupied areas who would pose as ordinary citizens doing ordinary things, which sometimes included knitting. 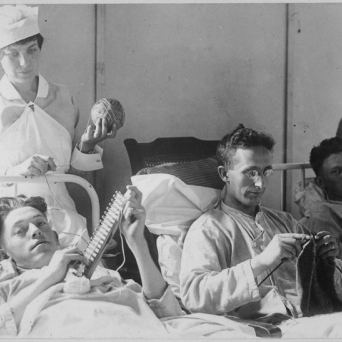 In many cases, just being a knitter was enough of a cover to gather information, and this tradition continued decades later during World War II. Phyllis Latour Doyle, secret agent for Britain during World War II, spent the war years sneaking information to the British using knitting as a cover. She parachuted into occupied Normandy in 1944 and rode stashed bicycles to troops, chatting with German soldiers under the pretense of being helpful. Afterwards, she would return to her knitting kit, in which she hid a silk yarn ready to be filled with secret knotted messages, which she would translate using Morse Code equipment.