The Flying Shuttle was one of the most important inventions of the early Industrial Revolution. Before its invention, weaving had mostly been a cottage industry done in small home workshops. After its invention, large factory looms began putting small-scale hand weavers out of business. The speed of the Flying Shuttle factory loom drove the invention of machine spinning, which in turn created a huge demand for cotton.

The Flying Shuttle was invented by John Kay in 1733. He was seeking for a new kind of shuttle that would speed up the relatively slow pace of hand weaving. The role of the shuttle is to insert the weft between the warp threads on the loom. The warp threads run vertically from the front of the loom to the back, and the weaver raises some threads while lowering others. This creates the “shed,” and the shuttle is thrown through the shed by the human hand, traditionally. 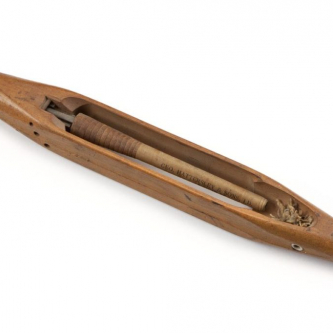 On a traditional shuttle, the weft rolls off a bobbin in the shuttle and comes out one side of the shuttle. John Kay invented a shuttle that was mechanically thrown. The weaver never touches the shuttle except to change the bobbin. This invention greatly sped up the weaving process and made it possible to weave much wider cloths. The new invention was controversial because it drove some hand weavers out of business. 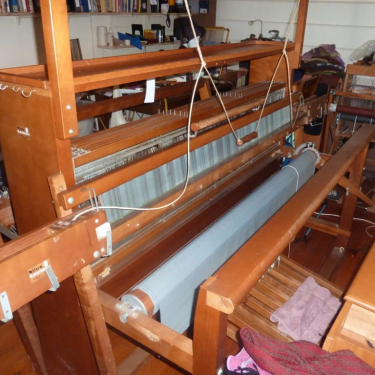 A Flying Shuttle on a Nilart

Kay’s invention paved the way for mechanical power looms, however, the technology would have to wait another 30 years before a power loom was invented by Edmund Cartwright in 1787. Cartwright continued to make improvements on subsequent iterations of the power loom and established a factory in Doncaster to mass produce them. However, he had no experience or knowledge in business or industry so was unable to successfully market his power looms, using his factory only to test out new inventions. He invented a wool-combing machine in 1789 and continued to improve his power loom.

The Flying Shuttle is another example of how one innovation during the Industrial Revolution led to another. Without the Flying Shuttle, it is unlikely the textile industry would have grown like it did in England during the 17th century.