Huguenot Weavers were silk weavers of the Calvinist faith. They originated from Flanders and were also found in the cities of Lyon and Tours. After the Revocation of the Edict of Nantes in 1685, the Huguenots found themselves religiously persecuted, with many fleeing to England.

They settled first in Canterbury, with eventually 13,050 moving to Spitalfields in London. Their arrival had a major impact on the area economy, and Spitalfields consequently became known as “weaver town.” Most of the Huguenots in Britain involved in the silk trades had been merchants, master weavers, or journeymen in various textile industries in France. They were soon accepted by the Weavers’ Guild and made Black, Plain, Fancy and Flowered silks.

In 1753 the Lyons Chamber of Commerce reported that ‘the epoch of 1685 was fatal for our industry because it occasioned new establishments in England and Holland’. In 1914 there were still 46 silk weaving workshops in the Bethnal Green and Spitalfields areas of East London.

James Leman, a second-generation Huguenot, who unusually combined his skills as a designer with his role as a master weaver. He became a famous figure in the textile community rising to second in command of the Weavers’ Company, the ancient guild that controlled the craft in the City of London. 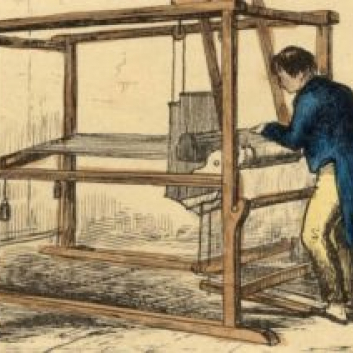 The Victoria and Albert Museum in London holds an album with designs for woven silk by James Leman, known as the Leman Album. This album contains more than 90 designs for woven silks and includes some of Leman’s work from the period 1706-1716, as well as five designs from the 1730s. The earliest patterns in the album date from when James was eighteen and are the earliest known collection of designs for silks in the world.

Although Huguenots were central figures in the development of the London silk industry, responses to their arrival and to the prospect of their naturalisation in Britain were mixed. The perception from many in the media was naturalising the Huguenots would undermine the Magna Carta and the native perception of liberty. Bit as history would tell us, they embraced their new home just fine.