The Industrial Revolution was an explosion of ideas, with inventions rarely happening in isolation. The Spinning Mule is a fantastic example of how one invention inspired another, continuing the innovative progression associated with the time period.

The Spinning Jenny was invented in 1764 by James Hargreaves, changing the British economy forever. The machine used eight spindles onto which the thread was spun from a corresponding set of rovings. By turning a single wheel, the operator could now spin eight threads at once. Improvements would continually be made, with the final machine using eighty spindles. 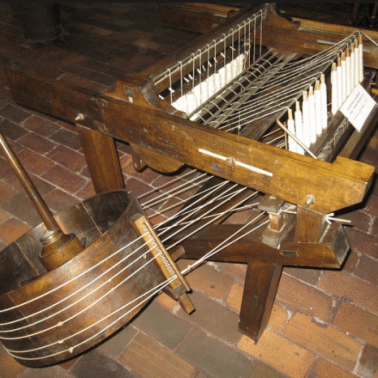 James Hargreaves wasn’t able to patent the Spinning Jenny until 1770, resulting in various copies without paying him a penny. By the time of his death in 1778. there were over 20,000 spinning jennies in operation across Britain.

The Spinning Mule was one of the many inventions during the Industrial Revolution that took inspiration from what James Hargreaves had so far achieved. Samuel Crompton became frustrated with some of the defects on the Spinning Jenny, and used its initial concept to expand and create a more efficient machine.

Between 1775 – 1779, Crompton took the moving carriage of the Spinning Jenny and combined it with the rollers of Arkwright’s water frame. It gave greater control over the weaving process and the spinners could make different types of yarn, creating a highly versatile machine. Each carriage carried 1320 spindles and was up to 46 metres long. The carriage moved back and forth 1.5 metres, four times a minute.

The progression of the Spinning Mule led to concerns from spinners who worked from home. They saw the invention as a threat to their livelihood, and in hindsight, they were entirely correct. Inventions such as the Spinning Mule eventually led to discontent that would result in the Luddite riots. Ultimately, the Industrial Revolution changed the workplace of Great Britain, with people leaving their farms and homes to work in factories in the cities. The Spinning Jenny, and then the Spinning Mule, would be a major step in the mass consumerism we take advantage of today.