The humble origins of the Industrial Revolution owes much to the tenacious spirit of a knitting love-story. William Lee, of Calverton near Nottingham, invented a mechanical knitting machine in 1559 to impress a young woman he fell in love with.

Young men haven’t changed in that regard, and his sedulous attempts to captivate his love interest were thwarted time and time again. The woman was a keen knitter, often knitting stockings at any opportunity; William’s sugary talk had subsequently fallen on deaf ears.

His desire for a wife was soon overtaken by a malevolent determination to spoil her knitting passion forever, ultimately inventing the stocking frame. He would observe her making loops and wondered how he could perfect the technique with mechanical engineering.

After three years of hard work, he was able to produce a machine that could form the heel and foot of a stocking. A few more tweaks here and there and the stocking frame was ready. His invention sparked the interest of the young girl, but in a strange twist of fate, it was in vain. William Lee had now became so obsessed and engrossed in the stocking frame that he lost all interest in the woman.

He would later approach Queen Elizabeth I in hopes of gaining a patent for his invention, only for the Queen to refuse for fears on the survival of the hand-knitting industries.

This didn’t deter him and he continually upgraded the machine, going from 8 needles to the inch to 20. By 1598, he was able to knit stockings from silk, but was again refused a patent, this time by King James I. 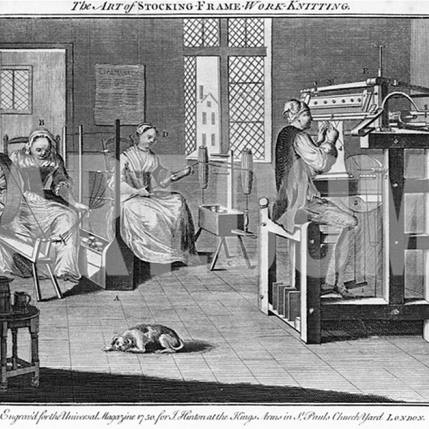 An illustration of the stocking frame inaction

William Lee moved to Paris with his workers in the hope of maintaining his business, but it was unsuccessful. He died in Paris and his workers returned to England and sold the frames in London.
The commercial failure of Lee’s design might have led to a dead-end for the knitting machine, but John Ashton, one of Lee’s assistants, made a crucial improvement by adding the mechanism known as a “divider.”

The rest, as they say, is history. Textiles became a lucrative part of Imperial Britain, becoming a driving force behind the African slave trade which exported cotton from the Americas to the factories in the UK. Without the stocking frame, the Industrial Revolution probably wouldn’t have happened as soon as it did.
William Lee died before his invention could reach is potential. I sad twist in the plot of what started as an unrequited love story.