During the run up to the American Revolution, most clothing was handmade and learning the craft of needlework was a vital part of education for women. Sewing and knitting became not only necessary skills but also political tools for resisting authority during the American War of Independence.

The taxation era of the 1760s and 1770s meant that many women began spinning their own cloth to protest the expensive taxes put on the textile industry. Fronted by the Daughter’s of Liberty movement, spinning bees were held at churches and between families to see who could create the most homespun yarn, and the boycott of British textiles was a memorable contribution toward the Revolution. Like in many of the wars throughout history, women also used needlework to make uniforms for soldiers. In the lowest moments, the most unfortunate soldiers were reportedly clothed in nothing but rags, and it was the efforts of spirited women who rounded up old blankets, yarn and worn-out clothing that helped to dress them properly. 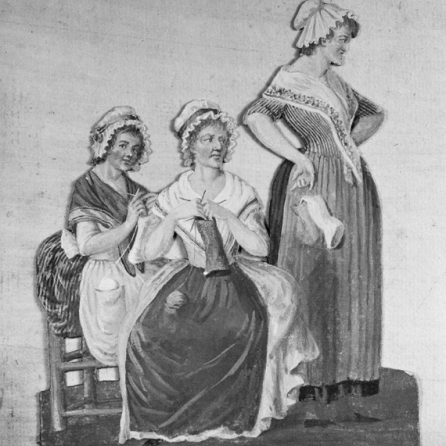 Perhaps one of the most prominent figures to mention, a knitter and tavern owner from Philadelphia named Molly “Old Mom” Rinker was rumoured to have hidden the movements of British soldiers in her balls of yarn. She would pretend to knit on a rock overlooking Wissahickon Valley and drop the information down to the American resistance.

While the female involvement in the military efforts of the war were minimal, their influence on political culture was vast and greatly contributed to the eventual American victory.