The ancient technique of nålebinding is thought to have led to the knitting techniques we use today. The oldest fragments of nålebinding were found in the Nehal Nemar cave in Israel, thought to have originated around 6,500 BCE, older than the Pharaohs of Ancient Egypt. However, the technique is closer associated with Denmark, where fragments have been found dating from 4,200 BCE.

Nålebinding literally means ‘needle binding’ when translated from Danish. The method creates an elastic fabric that uses short lengths of yarn and a single-eyed needle. In its simplest form, the needle is passed through a seed loop to form a new loop, taking care no to tighten too much to avoid a firm knot. The needle is then passed through a new loop. repeating the process.

The nålebinding technique.
Considered more laborious and slower than knitting due to the time taken for each stitch, nålebinding has slowly decreased in popularity. However, as each row’s height corresponds to two or three rows of knitting, nålebinding can be much quicker. Another misconception is its reputation of being difficult to learn. While some of the techniques benefit from prior knowledge, with the correct mentor, nålebinding is easy to pick up. It also doesn’t unravel meaning it doesn’t need special finishing borders to hold it together.

Nålebinding became notably popular during the Viking era, with one of the most famous artifacts from the time, the Coppergate sock, being an example of the Viking influence on Britain. Peculiarly, nålebinding has been found as far as South America, where it is still practiced by the women of the Nanti tribe in Peru. 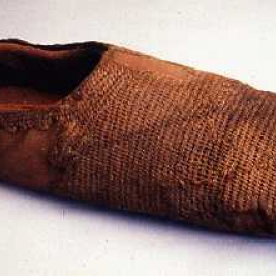 The long history of knitting has its roots at a time before civilisation, quite a surreal thought. While the needles have changed from ivory or bone to bamboo or steel, the technique remains largely the same. Predating even agriculture, the story of knitting is one of history’s most complex tales.