Pompeii is famous for the eruption of Mount Vesuvius that left the city in ruins. While the city was completely destroyed by the eruption, the ash that quickly settled was able to preserve some of the remnants, including evidence of the city’s rich textile history.

With around 38 cloth manufacturers discovered in the remnants of Pompeii, suggesting a an industrial output as opposed to a local output. It is thought wool was the yarn often produced, with a variety of different wool transported to Pompeii from across the Roman Empire. The increase in demand for wool would lead to an increase in sheep agriculture in Roman Britain, with an accompanying textile industry.

The Eumachia building suggest the city flourished from the textile industry. Evidence suggests the building was used as a wool market and a guild house for the fullers. A statue of Eumachia was in the centre of the building, along with a statue of Emperor Tiberius. 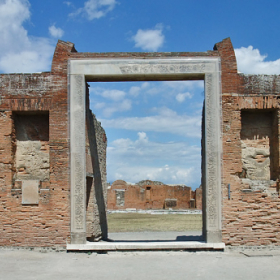 Ruins of the Eumachia building.

Pompeii had many different workshops, many used for a wider commercial use. They had official names, including:

Officinae Lanifricariae: This type of workshop was where the raw wool was processed. Most facilities of this type were located to the east of the forum where there was a small scale ‘industrial park’ which housed outlets dealing with manufacturing on a commercial scale.

Textrinae: These workshops were dedicated to the commercial spinning and weaving of wool, possibly before passing it onto a dye workshop.

Officinae Tinctoriae: Dye workshops have been identified by kilns on the premises and plant remains for making pigments. They were distributed about the city, suggesting they were just as likely to dye cloth for the local communities as well as on a commercial scale. They could also have been linked to their own local retail outlets. Clothes shops existed in Pompeii and many of the dye workshops could have been supplying specific local retail outlets.

Fullonicae: Fuller’s workshops were where raw wool was cleaned and woolen clothes were finished and also washed. They were located close to main streets, in the same area as other shops and small businesses. Fullonicae also served as local launderettes as well as playing a part in the commercial production of cloth. 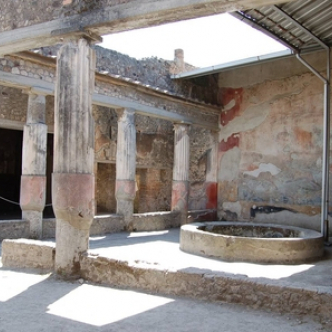 Fabric was pounded in narrow basins, with urine and fuller’s earth used to bleach it. Clothes would then be dried in an open courtyard, where they were brushed and finished. The whitening process would be completed by winding the cloth around a cylindrical frame and then applying sulphur. Creases were ironed out by a wooden clothes press.

Ultimately, the fate of Pompeii would diminish its thriving textile industry. However, the preservation of evidence surrounding this prosperous page in history lays a light on how textiles pushed trade. While Pompeii is now an archaeological site, its influence on the world has remained present.