Knitting arrived relatively late into Scotland, with records starting at the turn of the 17th century. Even with its recent arrival, one village, Sanquhar, has a unique relationship with knitting; a pattern developed in the village would soon become well known across the globe.

In the 1770s, the Board for Fisheries and Manufacturers, an organisation set up to reignite the Scottish economy using funds from the Treaty of Union of 1707, began to concentrate on the woolen industries, giving £40 in premiums a year to the knitters of Sanquhar. 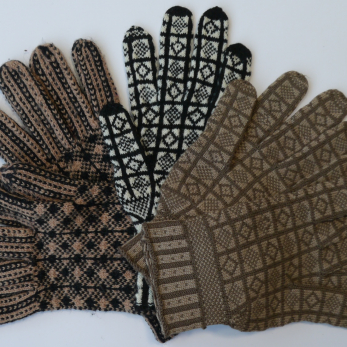 The majority of the townsfolk had soon become involved in knitting, supplementing the family income. The hard cash made from knitting would pay rentals and buy luxury goods such as medicines and books. It would also give protection from famine if harvests failed and was therefore encouraged by local gentry.

The rise in the industry wouldn’t last long, however, with revolution wars across America and Europe in the 18th century contributing to the downturn. Close to Sanquhar, a new woollen industry was developing, creating a market for the plentiful supplies of local fleece and expanding employment for a workforce already highly skilled in textile manufacture. This was the carpet factory at Crawick Mill and its success must have relieved local people of much of the hardship caused by the sudden loss of trade in knitted goods.

It was most probably around this time that the distinctive two colour patterns now identified with Sanquhar knitting developed. It is unlikely that the vast numbers of stockings made in the 1770s and 1780s were patterned., although there were similar patterns used in Yorkshire in the 17th century. 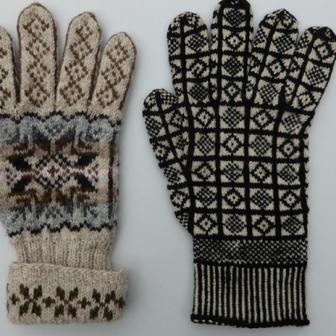 Sanquhar patterns have similarities with traditional knitting from Scandinavia. More specifically, there is close correspondence to knitting of the same period from Aberdeen and the Yorkshire Dales. Ideas may have travelled these distances but it is more likely that they arose independently from the simple coincidence of similar solutions being found to similar problems.

Despite the temporary protection given to the trade in hand knitted garments by their quality and distinctive patterning, by the 1830s it had disappeared from all records of business in Sanquhar. Nevertheless, the traditions of the knitting industry survived and were passed on from generation to generation of knitters, who made garments for their families or knitted for cash in their spare time.

Today, the growing appreciation for traditional knitting has led to a revival of the Sanquhar pattern.