Hiyahiya S History Of Knitting Tambour In The Tamil

The technique of tambour embroidery is thought to have originated in India and found its way to Europe by the 18th century, where it would inspire the development of crochet. Tambour itself saw its origins begin in a craft known as Ari which involves creating a long chain stitch with a long, thin hook.

Ari embroidery travelled from Brabanki in Uttar Paradesh to Kutch in Gujarat where cobblers first applied the technique to leather and then to cloth. The cobblers created ornate patterns with floral and wildlife motifs that were favoured by the royalty of the Mughal Empire in the 16th century. The technique would soon find itself in Persia and then onto Europe. 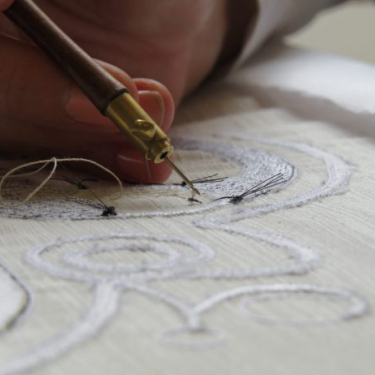 Tambour embroidery arrived in the French town of Lunéville in 1810, and was adopted by the ateliers due to the speed and efficiency of the technique. Tambour means drum in French and refers to the technique of stretching the ground fabric tightly across a frame to create the tension needed to embroider a regular chain stitch – a tambourine has a similar tension, hence its name.

Eventually the technique would evolve without the frame and would be known in France as “crochet in the air;” the stitch would work without the background fabric. Crochet would go on to become incredibly popular in the 20th century, sparking amigurumi which continues to be popular today. Tambour embroidery would become almost irrelevant due to the Industrial Revolution, however, tambour beading remains popular among high-end fashion houses. 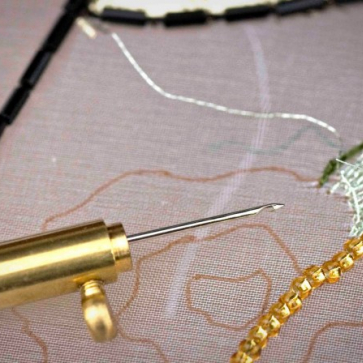