In the ancient town of Ledia in Northern Greece, there once lived a talented weaver named Arachne. Arachne’s downfall was her vanity, as she was extremely boastful of her talent and claimed she could weave even more delicately than the Goddess Athena.

Once Athena heard of this, she presented herself as an old woman to Arachne, and warned her not to offend the deities. Arachne then threw her thread at who she thought was the old lady in arrogance, saying she did not need her advice, and that Athena should compete against her.

The old lady then transformed herself back into the beautiful Goddess, and the pair immediately started weaving. Athena wove contests between the Gods and mortals, with the Gods punishing the mortals for daring to present themselves as the Gods’ equals. Arachne on the other hand made fun of the Gods, and wove scenes of their failures and infidelities including Zeus being unfaithful with Leda. Athena took great offense to Arachne’s work as it not only insulted the Gods, but was even more beautiful than her own. 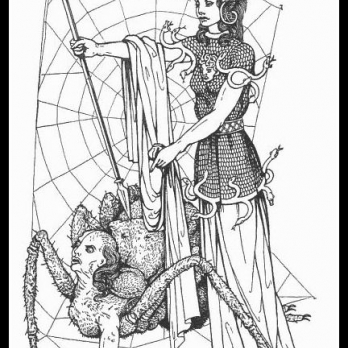 In Athena’s rage, she called Arachne stubborn and foolish and told her to ‘go ahead and spin forever!’ before sprinkling her with the juice of magical herbs and transforming her into a small and ugly creature, nowadays called a spider. Ever since, the spider Arachne is said to be cursed and trapped inside her own web forever, constantly weaving and having her webs destroyed by humans.