The origins of hand spinning are thought to date back to the Paleolithic period, with the discovery of loin cloth in France, carbon-dated back to 25,000 B.C.E. While it’s easy to look back at such a period with a little condescension, there were some surprisingly sophisticated tools invented during the period, including the hand spindle.

Before the hand spindle, it was likely that yarn would be made by rolling individual fibres on the thigh, slowly twisting them together. This method was great for making traps and nets, but not efficient for making clothes at a time when leather and furs were worn instead. The hand spindle would eventually change the kind of clothes people would wear. 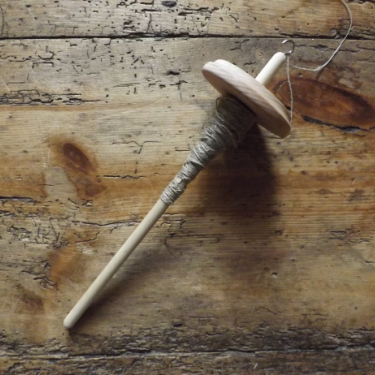 A hand spindle is an implement which can be rotated by hand to spin yarn or thread. During the Paleolithic period, it is thought a hand spindle would have been made from a branch and a rock, with the fibre spinning around the branch, although none have been found, only small fragments of fabric thought to have been made by this technique. 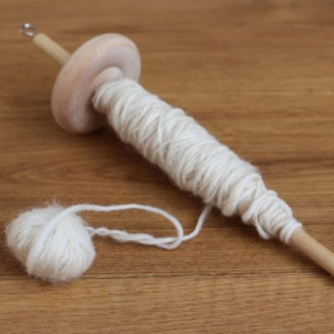 The hand spindle would soon reach every corner of the Earth, with different variations of yarn requiring different alterations to the hand spindle. The spindle style most widely used throughout history has been the small bead whorl type. It was the basic spinning tool in India, Africa, Southeast Asia, much of China, and throughout Meso-America.

By 2,500 B.C.E., the Egyptians were spinning linen so fine it could be woven at 540 threads per inch. The Peruvians were able to spin alpaca yarn at 191 miles per pound. The famous Dhaka muslins spun in India measured 253 miles per pound. Eventually, the spinning wheel would be invented in India that made the hand spindle obsolete. But for thousands of years, the hand spindle was supreme.