Around the middle of the 14th century, something curious happened. Catholicism and the influence of the Papal State at its peak, and the Virgin Mary was appearing in paintings and other forms of art across Europe. In Italy and Germany, where Catholicism was particularly strong, the Virgin Mary was being depicted knitting alongside the baby Jesus. 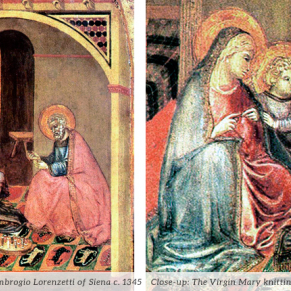 Known as the ‘Knitting Madonna’, these paintings tell the story of how knitting spread across Europe. The Virgin is often seen knitting in the round and doing colourwork, showing these techniques were in full swing in Europe by the 14th century.

The reason why the Virgin Mary is knitting remains unknown. However, it is thought that knitting was becoming more commonplace and more fashionable among upper-class women. The image of the Papacy was perhaps already waning, with the Reformation occurring at the turn of the 16th century. Such artworks would likely keep Catholicism popular where it most mattered.

In reality, the Virgin Mary was unlikely to have knitted. The oldest knitted artifacts found date back to the 11th century in Egypt, a long time after the Virgin Mary was said to have existed. This suggests depicting the Virgin Mary as a knitter was a political move by the Papacy, and there after that of the Italian and German leaders, to maintain a soft influence over the population.